The village of Villierstown was established as a new town in the 1750s as a place to house the linen workers brought in from Ulster to work the newly established linen industry on the Dromana estate. For more on this early period see the article = https://niallbrn.wordpress.com/2015/03/09/villierstown-and-the-linen-industry/

This article examines the village of Villierstown as recorded in the census returns for 1841 and 1851, i.e. before and after the Great Famine, the big watershed in nineteenth century Irish history. In the census returns for 1841 and 1851 there were twenty two townlands listed in the civil parish of Aglish along with two islands on the River Blackwater. The total area of the parish was 6,856 acres and 33 perches. The Poor Law valuation of the parish in 1851 was £5,199 16s. Within the parish were two villages, Aglish and Villierstown.[1]

The total population of Aglish parish in 1841 was 3,783 while in 1851 this had fallen to 2,769.[2] In 1841 Aglish was the bigger village with 458 people living in an area of 47 acres (9.7 people per acre). In 1841 Villierstown had 328 people living within an area of 16 acres (20.5 people per acre).[3] Although Villierstown had a smaller population and land area it was more densely populated than Aglish. The present day image of Villierstown with its tree-lined main street and spaced out housing gives the feel of space for its inhabitants. In 1841 Villierstown had the feel of a crowded place. This will be further seen when we see the housing stock in the village later in this article.

The 1841 census gives a further breakdown of these figures. Of the 328 people in Villierstown there were 157 males made up by 137 heads of families and their male children, 17 male visitors and 3 male servants. The breakdown in the numbers for the 171 females was 133 heads of families and their female children, 33 female visitors and 5 female servants. It is difficult to know if these 50 visitors were residents within Villierstown or if they came in from outside and were just there for census night.[4]

Villierstown was originally founded to house linen workers who had come from Ulster to work the newly established linen industry on the Dromana estate. By 1841 the linen industry was long gone out of business. In 1841 twenty-six families worked in the manufacturing and trade occupations while most (32 families) were involved in agriculture and 5 families were involved in other occupations.

In the early nineteenth century Edward Wakefield described the Irish as ‘anxious, nay eagerly anxious for the education of their children’.[7] The people in the parish of Aglish and the village of Villierstown were not found wanting in this quest for education. In 1835 there were seven schools operating within Aglish parish. The exact location of these schools could possibly be determined but the author has insufficient resources for such research at this time. Joseph Machesy operated a day school for 57 boys and 20 girls which was established in 1833. The school taught reading, writing, arithmetic and bookkeeping. Patrick Dower’s school was also established in 1833 and had greater numbers attending. In 1835 there were 75 boys and 30 girls. He taught reading, writing and arithmetic.

The schools operated by Walter Hallahan, Martha Finn and Patrick Connell had smaller numbers attending. Walter Hallahan had 35 boys and 17 girls; Martha Finn had 15 boys and 22 girls and Patrick Connell had 30 pupils I summer and 20 in winter. The school operated by Maurice Wilson was closed in winter and taught reading, writing and arithmetic to 60 boys and 10 girls in summer.

The school within Villierstown village was operated by Martin Norris. This school, located beside the chapel, was funded by Villiers Stuart family of Dromana, the local landlords, with £30 per year. There was in addition to the school a dwelling house along with one and a half acres of land. In 1835 the school taught reading, writing and arithmetic along with needlework for the girls. Rev. Philip Homan, the chaplain at Villierstown chapel, supplied the school books. There were 88 boys and 65 girls.[8] By 1851 Rose Anne Norris was in charge of the school.[9] In 1857 a boys national school was opened in Villierstown as part of the national primary school system. In 1860 a girl’s school opened.[10]

The schoolhouse operated by the Norris family in Villierstown

Of the 328 people living in Villierstown in 1841 there were 284 people over the age of five and 44 children under five which meant there were 87 people between five and fifteen years. Among these 284 people 54 men and 40 women could both read and write (33%); 11 men and 12 women could only read (8%) while 67 men and 100 women (58%) could not read or write. When compared to Aglish village the literacy skills of Villierstown looks good. At Aglish only 36 men and 20 women could both read and write or 13% of the people over five years old. Yet other towns, such as Clashmore, had a better literacy rate where 47% of those over five years could read and write.[11]

Villierstown on the eve of the Great Famine

The village of Villierstown in 1841 stood brightly in the summer sun when compared to the other urban settlement in Aglish parish, namely, Aglish village. It had a better housing stock and literacy level yet there were fewer people living within each house in Aglish. Villierstown had the feel of an overcrowded place. A few years later this planned estate village would experience an unplanned Great Famine along with the rest of the country. The feel of the village would change as would its future performance.

The published histories of the Great Famine in County Waterford seem to overlook Villierstown as a place impacted by the famine. Maybe the famine indeed passed it by as the village was so close to, and associated clearly with, the core of the Villiers Stuart estate at Dromana and thus within earshot of assistance if any was required. Yet the 1851 census shows a big fall of one thousand people in the population of Aglish parish, from 3,783 in 1841 to 2,769 in 1851. This decline is consistent with other parishes across Ireland and reflects the big impact of death and emigration that resulted from the Great Famine.

In 1851 the population of Aglish village had fallen to 257 (458) people or 56% of the 1841 figure while that of Villierstown had fallen further to 159 (328) people or 48% of the 1841 figure. The number of inhabited houses in Aglish was 43 which gave an occupancy rate of 5.98 people per house. At Villierstown there were 34 inhabited houses and one uninhabited house.[12] In Griffith’s Valuation (produced in March 1851) there were 32 houses listed for the village of Villierstown along with the caretaker’s house with an additional 29 houses in the surrounding townland of Villierstown. According to Griffith’s Valuation, the only uninhabited house was outside the village but within the townland of Villierstown.[13] The seemingly different method of recording data can make comparisons difficult yet the difference in this case is not that great as to cause a problem. 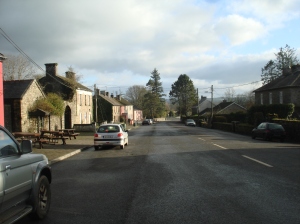 Main street in Villierstown in 2015

The named people of Villierstown in 1851

The individual census returns for 1841 and 1851 no longer exist. We therefore do not have that lovely information we today find in the census returns for 1901 and 1911 telling us the names of individual people, their age, occupation and literacy skills. Some compensation for this loss is provided by Griffith’s Valuation. In this source we get the named occupier of each house in Villierstown in 1851.

The people who held a house and garden included James Collins and Mary Burke.

Earlier we saw how the total population of Villierstown declined from 328 in 1841 to 159 in 1851. Overall in the parish of Aglish the population fell by nearly one thousand, from 3,783 to 2,769. Yet this decline hides individual increases in population as the townlands of Ballingowan West, Ballynacourty, Ballynaparka, Monagally East and Villierstown recorded an increase between 1841 and 1851. Many of these townlands surround Villierstown village. Could it be that the reduction in the population of Villierstown between 1841 and 1851 corresponded to an increase in the surrounding townlands? Or was this increase in the five townlands caused by people coming in from further out in the Dromana estate? The 1851 census does not give a breakdown of the different types of housing stock to determine if the poor people who left Villierstown before 1851 moved to the surrounding townlands. Only a detailed examination of the Villiers Stuart papers at University College Cork can hope to answer these questions.

Clearly the Great Famine was not all about death and emigration overseas. People moved around and built new houses as the townlands surrounding Villierstown show. Yet decline was the order of the day and urban centres were not immune from this.

There were 150 people over the age of five in 1851 Villierstown. Of these 47 men and 37 women could both read and write (71%). Only 3 women and no man could read only and 22 men and 41 women could neither read nor write. This would suggest that many of those who left Villierstown between 1841 and 1851 were among the uneducated population. A study by Cormac O Grada on literacy in Ireland before the Great Famine showed that educated people tended to stay while the uneducated emigrated to foreign countries.[16]

The decline in the population of Villierstown since 1841 is shown in the reduced numbers of those employed in various trades. The dramatic decline in the number employed in agriculture (from 32 to 7) is a further reflection of the disappearing poorer classes who would have worked as agricultural labourers on the surrounding farms. Other enterprises also suffered decline as the number of those employed in manufacture and trade fell from 26 to 18. Yet alternative employment increased from 5 families in 1841 to 9 families in 1851. In times when the main sources of employment in an area are in decline, some enterprising people will seek out new forms of employment and this is seen in Villierstown after the Great Famine.

By 1871 Aglish village had stopped its decline and increased its population to 206 but Villierstown moved ahead again to 231 from 201. Yet by the time of the census of 1881 Aglish had gone into decline again having 175 people while Villierstown held its ground with 232 people. There were, in 1881, a total of 52 inhabited houses in Villierstown and two unoccupied houses or 4.46 people per house which was less than the 4.68 people per house in 1851.[19]

After 1881 the fortunes of Villierstown went into decline with the population falling to 214 in 1891 to 180 in 1901 and to 155 people in 1911 with seven uninhabited houses in the village in 1911. The surviving individual returns of each household in the census returns for 1901 and 1911 allows for a detailed examination of Villierstown between those years – a project for another day.

The village of Villierstown between 1841 and 1851 showed a complex village on the eve and aftermath of the Great Famine. A crowded village with many simple mud walled cottages surrounding the grander stone built and slate covered houses of the village core. Yet the population had access to education and to the wider world with the adjacent river Blackwater. The Great Famine caused population decline but the surrounding townlands increased their population. After this decline Villierstown increased its population until the 1880s when changes in agriculture (from tillage to pasture farming) forced many to leave the land and seek employment in the larger urban centres or overseas. In July 2015 Villierstown took part in the celebrations of Dromana 800 yet the history of the village since 1750 is a complex one as seen in this short study of the years 1841 to 1851.

This article is part of the Dromana 800 celebrations, 2nd to 5th July 2015 = for more information is www.dromana800.com

[16] Cormac O Grada, ‘School attendance and literacy in Ireland before the Great Famine’, in Irish Primary Education in the Early Nineteenth Century by Garret Fitzgerald, p. 114